Discussions on Fairness, Justice, and Equality in Middle Elementary 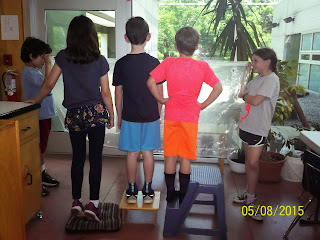 Middle Elementary students have recently had many serious and heartfelt discussions about fairness, justice, and equality - what these concepts mean to us personally and in our society. In one of our recent discussions we had a demonstration of the difference between equality, in which everyone gets the same thing, and justice, in which everyone gets what he or she needs. We had a large curtain held up in front of three children of differing height. At first, when everyone was on the same level, only the tallest child could see over the curtain. Next, we gave everyone an object on which to stand, which raised each child to the same level so they could all see over.

Three of the children made the following statements:

"Justice is a right for everyone. Everyone deserves it. Even if you've been bad, it's everywhere. Maybe it's in your heart or maybe in the deepest ocean or in the tallest mountain. You just have to look hard enough.
"Justice has more power than you know. It's in places you won't think of. Everyone needs justice for a different reason. Making justice can be difficult, but you can find it."
"Animals and plants even need justice. The time will come when you make justice. Justice is in you. You just have to believe it. You don't have to always battle for justice."

The future is in good hands.
Middle Elementary